Last month, we were leaving the Y, when a boy walked in carrying a Pop Tart. Since then, Arin has been asking for Pop Tarts. I think it is mainly because she wanted the sprinkles that she saw on top :) It has been a while since we did any baking together, but today we attempted homemade Pop Tarts.
For the crust (any pie crust will do, but this is the one we tried):
1 ¼ c. flour (we used fresh milled whole wheat)
¼ t. salt
5 T. cold butter
4-5 T. water
Mix the flour and salt together. Cut in the butter until the mixture is crumbly. Mix in the water and form into a ball. Wrap the ball of dough with saran wrap and put in the refrigerator for 15 minutes.
Then, roll out on a floured counter. We rolled our's out too thin. Next time I will remember to keep it thicker because there is no leavening in this particular pie crust recipe. Cut the crust into equal-sized rectangles or whatever shape you want. Spread jelly (we used Polaner All Fruit) in the center of the dough rectangles. Top with another dough rectangle. Then, with a fork, press the edges of the two rectangles together to seal. Poke the top of the Pop Tart with holes - we didn't make enough holes because our tarts still bubbled - but hey, it was just our first attempt! Bake in a 375 degree oven until golden brown (about 15 minutes). While they are still warm, frost them with a glaze made from a mixture of powdered sugar and milk. Then, Arin's favorite part - put sprinkles on top!
These were pretty good, except they were too thin, but they were easy to make and the crust had a good flavor. Plus, they were a little healthier to feed the kids than the store-bought varieties. 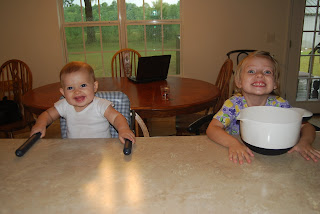 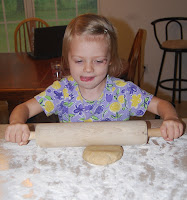 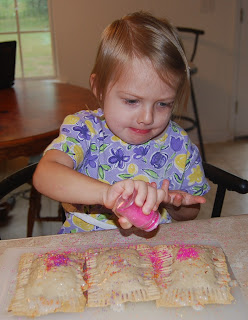 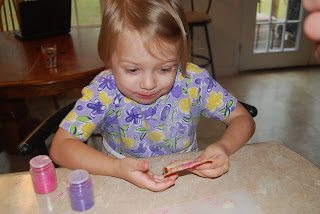 Posted by Peterson Party at 9:14 PM

Email ThisBlogThis!Share to TwitterShare to FacebookShare to Pinterest
Labels: Kids in the Kitchen

Wow, what a great idea! I'm going to try that.

Sounds great! I'm putting this on my to-do list :)