Adam and Eve in the Garden of Eden

During Ee week, we studied Adam and Eve in the Garden of Eden.  Before I read the story to the girls, I decided to tempt and test them.

I set out two plates.  The first plate was filled with fruit to represent The Tree of Life.  The second plate was filled with chocolate candy to represent The Tree of the Knowledge of Good and Evil.  Once I put the plates down, I told them they may eat all of the fruit that they want, but they may not eat any of the candy.  I talked to them for a couple of minutes (nothing too detailed) and made sure they understood.  Because we train our children "to be their brother's keeper", I told Arin that she was to watch out for her sister and remind her also not to eat any of the candy.  As a visual reminder, I put the fruit on a green plate and the candy on a red plate.  We also briefly talked about green meaning go and red meaning stop, just so they would remember as they were looking at the plates.  Then the test began. 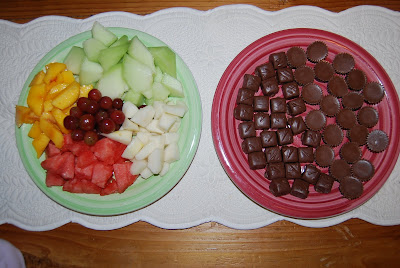 Ella was so cute, she picked up a grape and immediately walked over to me to confirm that she could eat it.  I reassured her that yes, she could eat all the fruit that she wanted.  So the girls ate.  They played.  They ate.  I had the plates on the coffee table in the living room and I kept myself busy in the dining room and kitchen.  I was still near, but not hovering over them.  I also did not have anything structured planned for the girls during this time.  I really wanted to test them to see if they would obey (as you see, I made it super easy for them to disobey by already having the candy unwrapped and in reach).  About forty minutes into the experiment, Arin asked me if she could have a piece of candy.  I told her no, she could eat the fruit.  About an hour into the experiment, this is how I found Ella!  Ella didn't see me snapping the pictures, which made it even better. 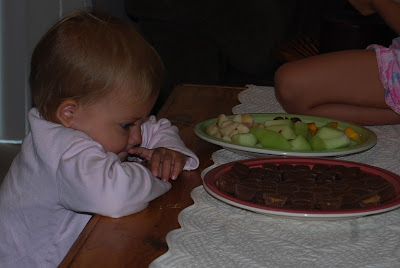 A little while later, Arin asked again if she could have a piece of candy.  I told her no.  Twice during the experiment, I overheard Arin telling her sister not to touch or eat the candy.  Two hours into the experiment, Arin said to me, "Mom, why do we have this candy if we aren't going to eat it?" (she was polite, just curious when asking)

After two and a half hours, I ended the experiment.  This is how the plates looked at the end of the experiment (they actually ate all of the first batch of watermelon and much of the second batch). 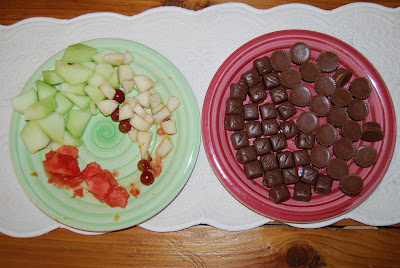 I was very pleased with my girls for not giving into temptation, though it was not always an easy task for them.  I am also happy that although Arin did ask three times for the candy, she never begged or whined when she was told no.

Once the experiment was over, I read the story of Adam and Eve in the Garden of Eden to the girls from several of their bible story books.  We talked about the importance of obeying, even if someone tells you to do something that you know isn't right.  It was very easy for Arin to relate to this story after being tested herself.

She also painted a picture of Adam and Eve in the Garden of Eden.  I helped her with the background and she did most everything else.  I was there to "coach" her somewhat while she was painting.  She really enjoyed making this picture and she seemed to understand the story well.  We are planning to frame the picture to put in her bedroom to remind her to always obey. 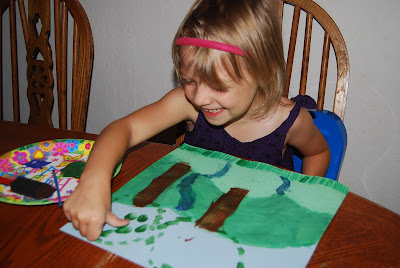 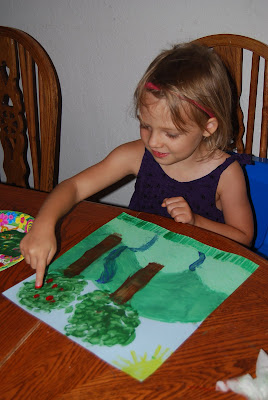 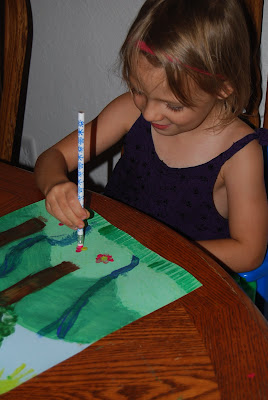 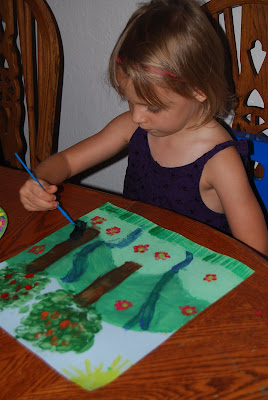 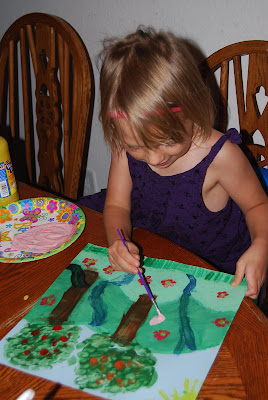 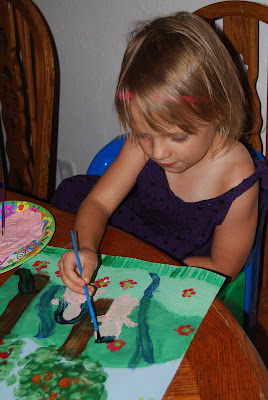 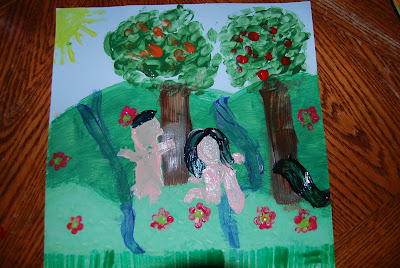 And yes, because the girls obeyed, they were rewarded with a few pieces of candy!
Posted by Peterson Party at 11:21 PM

Email ThisBlogThis!Share to TwitterShare to FacebookShare to Pinterest
Labels: Bible Story: Adam and Eve, Letter Ee, Letter of the Week

GREAT idea with the candy/fruit! I am definitely going to have to do that with C & A sometime.

Oh, Cara, I love, love, love your experiment! So creative and tempting. The look on your little one's face is so precious ~ I laughed so hard I cried. What a valuable learning lesson on temptation. We (my kids and I) are guessing that you let them have some chocolate after the experiment was over? :D Tell them great job! You too, momma! =)

And I have to admit that I was sad y'all weren't at our CFA fieldtrip this morning. I guess I was hoping y'all would surprise us...since I know how much y'all like that place!

wow i am super impressed with this experiment! what a great idea! this is definately my favorite one so far. and also arin did such a great job painting!! she really has a talent for art!

and ella watching them so hard lol. prolly thinking if she stared at them hard enough they would float into her mouth lol. priceless

I might try that with my girls ... I'd be very curious to see how they did.

I love that in the after experiment picture you can see that a couple of the chocolates, although not eaten were messed with!!!

This is fabulous!! I am teaching the lesson of Adam and Eve to a group of children ages 5-12.... and this will work despite the age span!! Can you suggest how I can shorten it a bit ? I only have a half hour. Thank you... love it!!