O is for Orange

You may wonder why we did letters A-J in order and now we are jumping to O.  The first reason is that going in alphabetically order became boring to us.  The second reason is because we love this time of year when the citrus comes into season.  Oranges are a family favorite.  Yesterday, my parents came for a visit and they brought us two boxes of oranges which had been picked fresh from a grove near their house.  Yesterday and today, we've been snacking on this awesome gift.  Then today, we decided to include the oranges in our school.  These activities were a big hit with the girls.

First, I asked the girls if an orange would float or sink when put in water.  Ella said "float".  Arin said "sink because it is in water, but if it was in vinegar it'd float"  I think Arin was remembering science projects that we had done in the past!  So Arin put the orange in a vase of water and it floated to the top. 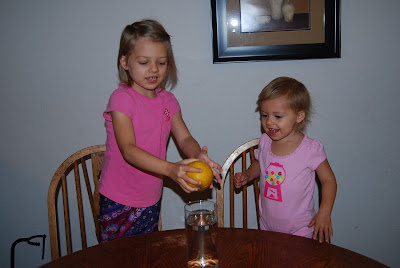 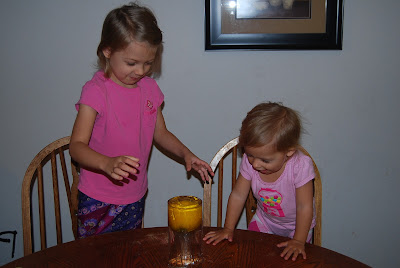 The girls took turns trying to make it sink and stay at the bottom, but each time they took their hand off from it, the orange would shoot back up to the surface. 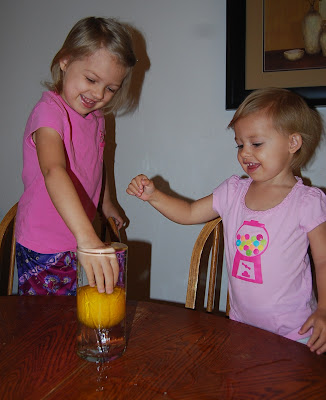 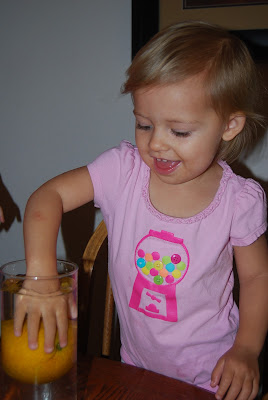 I then peeled the orange and asked them again if it would float or sink.  Ella said, "float" and Arin said "sink".  Ella dropped the peeled orange into the vase and it sank right away.  I explained that this is because there are tiny air pockets in the orange's skin which create bouyancy.  Once the skin was removed, the air pockets were also gone, causing the orange to sink. 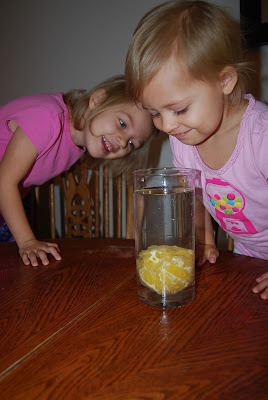 Next, I gave the girls each a tub of water, a wash cloth, a tooth brush, and a dry towel.  Obviously fresh picked oranges are not cleaned and waxed like the store bought kind, so I wanted the girls to wash the fruit for us.  I told them they could use the tooth brush to clean the oranges like they clean their teeth, or they could use the wash cloth to wash the fruit like they wash their bodies.  Once they were done washing the oranges, they were to dry them off.  My girls love to play in water, so this was a big hit with them. 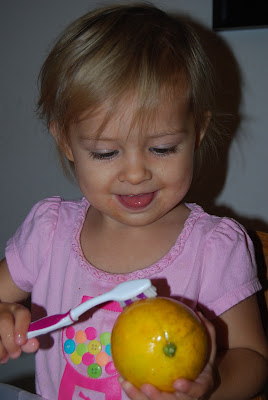 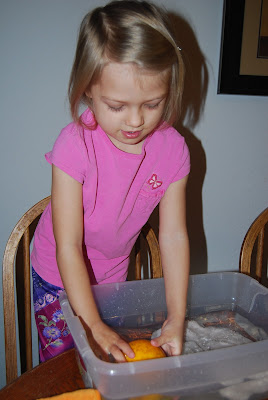 This evening, after dinner, the girls took turns juicing the oranges. We all enjoyed the sweet goodness of orange juice as our dessert. 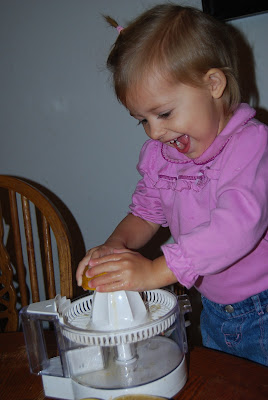 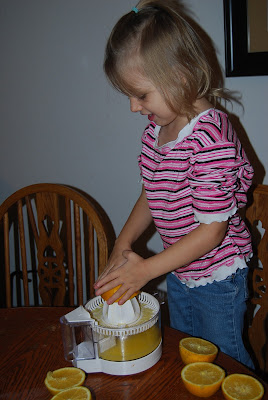 After cutting an orange in half, I very carefully pulled the orange sections out of the rind, leaving the white part in the middle in tact.  I should have let the orange rind dry out overnight, but we wanted to finish this project today.  I filled the empty half of the orange with olive oil.  Then, after several tries (this is why we should have let it dry out longer) we were able to light the natural wick and create an orange peel candle.  The girls liked this activity, but I really think that the concept impressed Andrew and me more. 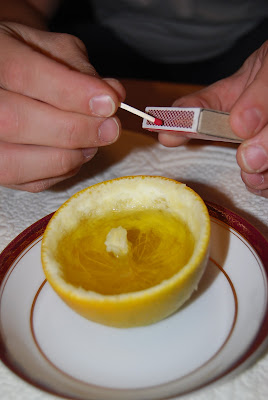 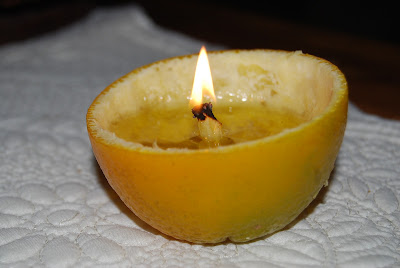 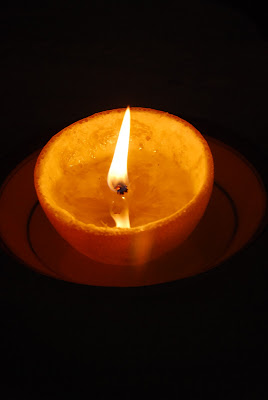 While trying to light the candle, Andy showed us another experiment.  He took a piece of fresh orange rind, squeezed it slightly to release a bit of moisture, and then touched a lit match to it.  Whenever the flame would hit the orange, it would crackle and the flame would double in size for a second.  In fact, it happened so quickly that I was never able to get a good picture, but it was amazing to the girls just the same. 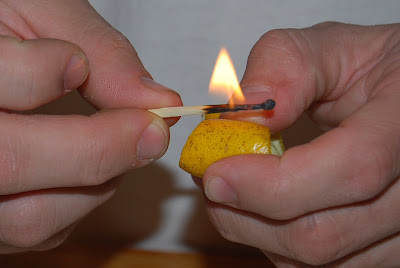 The final activity was perhaps their most favorite.  We put an empty coffee mug on the table.  On top of that, I placed a piece of card stock, about the size of an index card, then a match box sleeve, and finally an orange.  I asked the girls what they thought would happen when I quickly pulled the card out.  Arin said, "Everything will fall down."  We took turns pulling the card out.  If done in a quick, straight, motion, only the orange would fall into the mug.  If done too slow, nothing would fall into the mug.  The "trick" of course was to get the orange to fall into the mug.  I would compare this to the magic trick of pulling the table cloth off the table while leaving everything else in place. 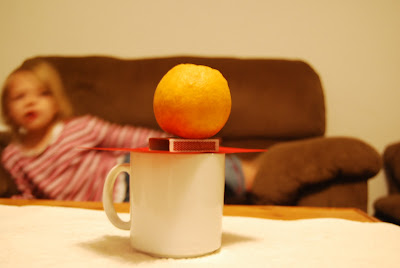 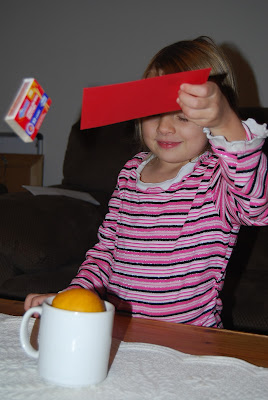 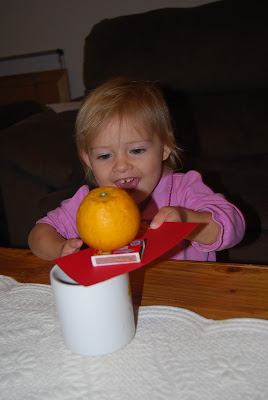 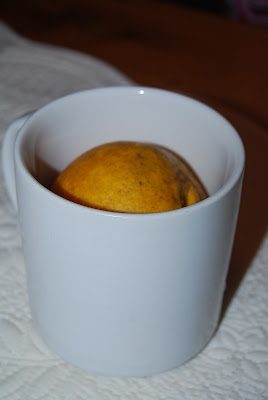 Thanks mom and dad for the fruit which made a fun-filled learning, snacking day!
Posted by Peterson Party at 10:42 PM

Email ThisBlogThis!Share to TwitterShare to FacebookShare to Pinterest
Labels: Letter of the Week, Letter Oo

Oh, how fun Cara! What an awesome blessing. :-) Makes me want some oranges now, too!

what fun and I LOVE the natural orange candle!

we never go in order with the alphabet! :)