This week we are working on the letter Ss.  We kicked off the week with Arin drawing this picture and writing this very short story.  She revised the story several times before settling on the finished product.  The first draft included a dinosaur that wanted to eat the swans, but she decided that sounded too scary, so the dinosaur got the cut and was recasted with a best friend fairy instead!


Ellie the Swan
by Arin 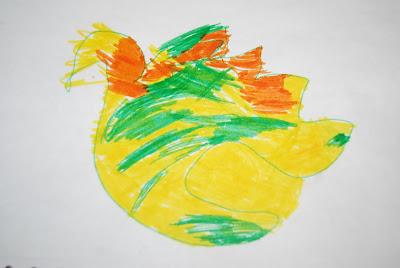 Once upon a time there was a teeny, tiny swan named Ellie.  She was the only swan that could run fast.  She loved to swim and dive and eat frogs and flies.  Her best friend was a fairy.
﻿The End!
Posted by Peterson Party at 11:31 AM

That is just so stinkin adorable!