Every year, since I was pregnant with Arin, we have saved our loose change and used it in one lump sum.  In 2007, we used this money for Arin's first birthday.  In 2008, we changed how we spent the money.  We started using it for Family Fun Day.  We love Family Fun Day.  We never had enough money to do something like Disney World, but we always tried to pack in as many activities as possible into one day.  You can see what we did in 2008 here and in 2009 here.

We saved our money once again last year and had fully intended to do Family Fun Day 2010, but with moving and Andy's new work schedule and this and that, the opportunity never seemed to present itself.  So a few days ago, Andy and I were talking and we decided to change things up once again.  Instead of using 2010's money all in one day, why not see how far we could stretch that money?  Thus, the birth of Family Nights.

Now, in our family, we spend a lot of time together - like almost all the time that Andy is not working, we spend together.  However, that mostly means that we are in the same house or maybe the same room, but usually still working on our own separate projects.  So we decided that over the next several months (until the money runs out), we will set aside one night a week to come together to spend structured time together as a family.

In order to keep it exciting, I have broken our Family Nights into ten broad categories.  Borrowing an idea that I saw at Chasing Cheerios (thanks Melissa!), I wrote each of these categories on a craft stick.  Each category is written on two separate sticks and placed in a jar (hoping we'll at least make it through 20 family nights).  At the close of Family Night each week, someone will draw a new popsicle stick to determine the next week's activity.  This way the excitement and anticipation will build over the next week and it'll also give time for planning a specific activitiy within the broad category. 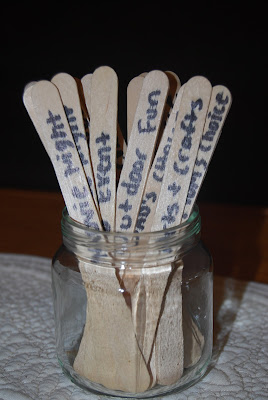 The categories are as follows:
Movie Night (either a movie rented from Redbox or streamed on Netflix)
Game Night (board games, charades, Wii games)
Science Night (quick, fun science experiments)
Arts & Crafts (painting, homemade products like floam or aqua sand, etc)
Outdoor Fun (bike riding, picnicing, fishing, etc)
$ Event (this would be an out of the house activity that we pay for like bowling, children's museum, etc)
Daddy's Choice
Mommy's Choice
Arin's Choice
Ella's Choice
All of the "choice" options would be up to that person to plan the night.  It could fall into one of the above categories or not.  It is completely up to the person in charge of that night.

Our goal is to see how far we can stretch the money in order to make as many fun memories together as a family as possible.
Posted by Peterson Party at 7:56 AM

What a great idea, Cara - I can't wait to see how your Family Nights go! (And thank you SO much for the link about CNY stuff!)

Love this! Especially love how you've written them on popsicle sticks. So cute! We've had an annual Family Party Day for the past 5 years and everyone looks forward to it! We decide on a theme together then choose decorations and food and activities around the theme. Last year we had a weekly family night but we stopped it about half way through the year cause we just got busy and slack. Seeing your prompts has really encouraged me to think about it again! Thanks so much Cara!!!
May 2011 be filled with many great family nights for you guys!
Love Lusi