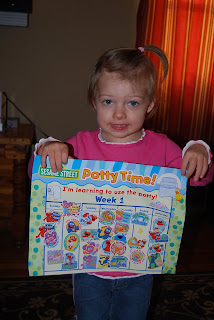 Potty training has been a tough task for us. Arin has had very little interest, though she knows when she has to go and knows when she has gone, but she'd rather not use the potty. We tried rewards, disciplining, wearing panties, several different potties, etc. My mom bought Arin an Elmo potty training coloring book. In the book, was a sticker chart and stickers. The first day, Arin used the potty four times (earning four stickers for her chart) and then after that she quickly lost interest again. This past weekend, we drove past Chuck E Cheese. Arin wanted to go play, so I told her that she had to finish filling her potty sticker chart (28 stickers total) and we'd take her. Apparently, that was the magic suggestion! It took her about five weeks to earn the first 18 stickers and about a day and a half to earn the next ten! She started on her second chart on Monday afternoon and by bedtime on Thursday evening, she already had 22 stickers on it.
On Wednesday, we took her to Chuck E Cheese for filling the first chart. She had so much fun. It's also great to take a two year old because you can spend very little and they have a great time. We spent $2, which allowed her to play 8 games and then she earned enough tickets to get three lollipops, which she was nice enough to share with her daddy and me.
This morning, I thought we were going to have troubles again. She earned her reward, so she didn't want to use the potty this morning, but I quickly reminded her about earning stickers so she could go back to Chuck E Cheese, so that got her back into gear.
We still have a long ways to go. She rarely tells me when she has to go, but she also rarely fights me on going when I tell her it's time. She now tries even if she doesn't have to go. Also, night and naptime will probably be difficult. She is wearing panties as long as we are home (and somedays having no accidents), unless it is nap and bedtimes. I also haven't attempted the potty training while we are out in public. My friend has a portable fold-up potty seat that she brings with her while out in public, so I will have to look into getting one of those. Progress is being made and it is very exciting!
Posted by Peterson Party at 10:58 PM

Email ThisBlogThis!Share to TwitterShare to FacebookShare to Pinterest
Labels: Arin

Yay, Arin! I HIGHLY recommend having a car potty. We don't go anywhere without ours!