The Rest of the Produce

Tonight, I am supposed to receive a second load of bulk produce and I am very excited about it!  I realized that I never finished saying what I did with the first load of fruits and veggies.  I am sure that you have been sitting on pins and needles wondering how we used it all, so without further wait, I will let you know!

As I already mentioned, the grapefruit were made into juice and the tomatoes were made into spaghetti sauce.  The peaches were just eaten and they were so good!  Almost all of the bell peppers and several of the onions were either sliced or diced and frozen to use in recipes later like quesadillas, fajitas, chicken and yellow rice, and omelettes.  It is so nice to have this convience food ready to toss into our recipes as we are cooking.  We ate two meals with the corn on the cob and then froze the remaining corn off the cob using this tutorial as a guide.

That brings us down to the yellow squash.  Some we just ate sauteed in butter, which is our favorite way to eat this vegetable.  We had so much squash, that I wanted to try some new recipes.  First, I tried making this recipe for stuffed squash.  It was a bust among all of us.  Bummer! 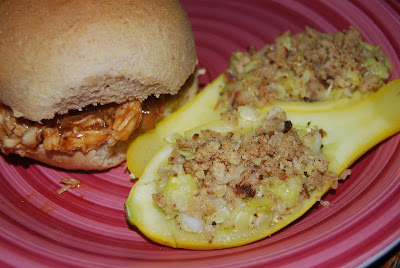 Second, I made yellow squash cookies, using this recipe.  I was a bust among most of us.  Amazingly, Arin thought these were awesome and she's asked for them a few more times. 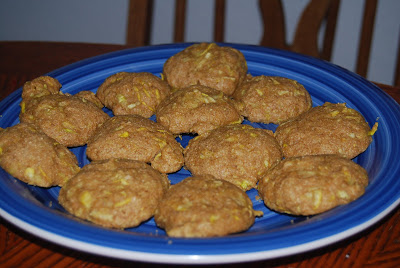 Lastly, I made yellow squash blueberry muffins, using this recipe for zucchini muffins.  Arin wouldn't have anything to do with them because they had blueberries in them, but Andy and I both liked them and Ella didn't seem to care one way or the other about them. 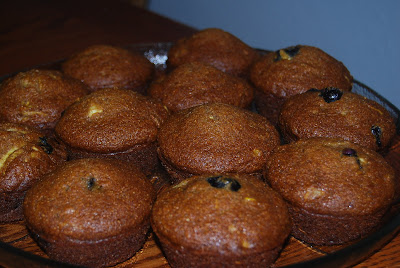 Does anyone have any good recipes for yellow squash?  I am not sure of everything I will be getting with the second load of produce, but I have been told there is some more yellow squash in it and I would love to have some tried and true recipes!
Posted by Peterson Party at 7:46 PM

Email ThisBlogThis!Share to TwitterShare to FacebookShare to Pinterest
Labels: Cooking/Baking

Squash cookies and muffins - WOW! You are VERY adventurous, Cara!