I have seen this activity on several different blogs and have always wanted to try it with Arin, but haven't in the past because I didn't want Arin to burn herself on the rocks.  Uncle Todd was here yesterday, so Arin wanted to do some sort of a project with him. We had leftover rocks from when we had gatehered them for our tic-tac-toe game, so we decided to go ahead and try this activity.  I put four rocks on a baking sheet and put them in the oven.  I turned on the oven to 350 and let the rocks stay in there until the oven was preheated.  Then, I took the rocks out of the oven and gave a couple to Arin and a couple to Uncle Todd.  Then, they colored the rocks with crayons.  The heat of the rocks melted the crayons, creating a cool effect.  We were surprised though that the wax was so runny and I thought that the color would have been a bit more bold. 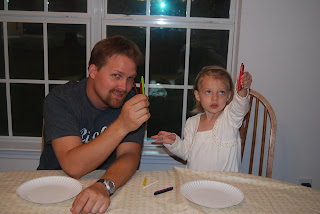 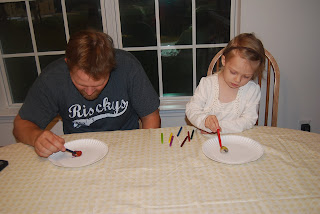 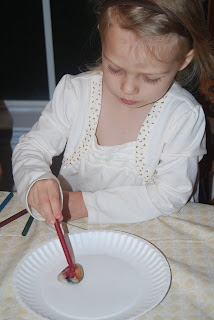 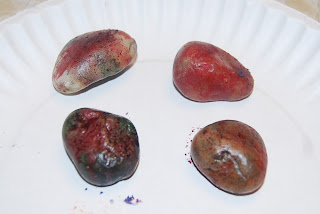 They also found out that it was cool to melt the crayon on the rock and then color with that crayon on paper, which created a different effect than coloring on paper with a cold crayon.
Posted by Peterson Party at 8:35 AM

Email ThisBlogThis!Share to TwitterShare to FacebookShare to Pinterest
Labels: Arts and Crafts