This week's Unplugged project is wrinkle. This was one of the more difficult themes for me to come up with any ideas. I thought of the obvious wrinkling paper. I thought about letting clothes get wrinkled and then let Arin help iron them, but I wasn't too excited about a two year old playing with an iron. So that idea was thrown out quickly. I thought about making paper because it usually has a wrinkled look, but again, she's two, so I wasn't sure if that'd be a project for her or one that was more for me! I was going to attempt to make our own raisins, but I didn't think of that idea until the middle of the night and I didn't feel like going to the grocery store this morning for grapes. So maybe we'll try that experiment another time.

What we did this week came from ideas that my little sister gave me. First, I had Arin wrinkle her nose. It was very, very cute. I didn't take a picture because she did it so well that I just knew she'd be able to do it again when I had the camera ready. Wrong! She seems to have forgotten how to wrinkle her nose as quickly as she learned to do it. 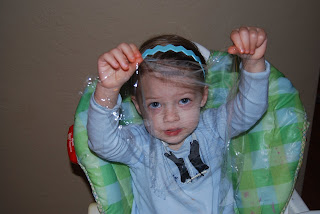 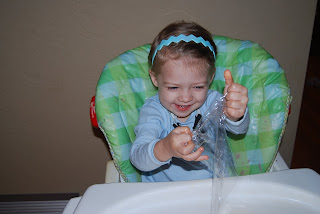 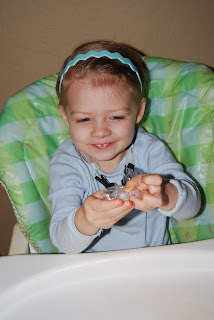 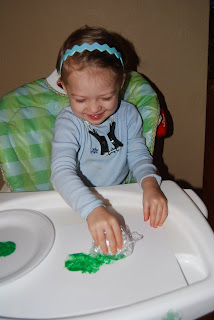 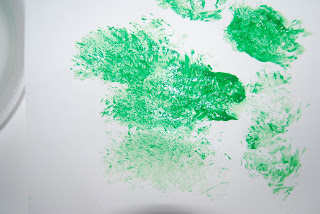 Next, I rolled out some Play-Doh and pressed Arin's hand into it, so we could look at the lines and wrinkles. It didn't work out quite as well as I had hoped. I also gave Arin a bath and let her hands and feet wrinkle. I was going to press her super wrinkled fingers into the Play-Doh, but it didn't work so well the first time and the Play-Doh was already put away and I didn't really want to get it out again. 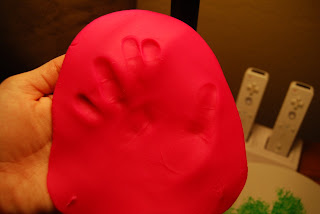 Email ThisBlogThis!Share to TwitterShare to FacebookShare to Pinterest
Labels: Arts and Crafts, Unplug Your Kids

Saran wrap painting is a great idea for little kids. I will have to try it.

I had a hard time with this theme too. I like the saran wrap painting idea though - my little one always wants to paint. Maybe we'll try it.

My little boy might actually go for saran wrap painting. He won't finger paint because he says the paint is too "sticky". Anyway, cool post.
Thanks for checking out my blog, and for the heads up on the bumgenius seconds.

I like the saran wrap variation! Esme came up with the wrinkled paper one, so she might want to try this one, as well!

Fun ideas with the saran wrap! We'll have to try it.