In addition to a few things that I needed to declutter this week, I decided it was time to get in the girls room and start cleaning it out.  My mother-in-law often says that she wants to buy some toys to have at the house when her grandchildren come to play, but toys are expensive and we are on a mission to simplify our house, so we asked if we could donate our old toys to them.  They agreed, which is awesome because they don't need to buy any toys, we get rid of the toys from our house, but the girls still get to play with the toys, which will make it seem like they are "new" toys since they will only have them when we travel to their house.  I do not want my girls to have the same attachment to stuff that I have had in the past, so I decided it was important for them to help me.  However, I did explain that they were only sending the toys to Grandma's house, so that probably made it a bit easier knowing that they would get to play with them again.  I showed the toys one at a time to Arin and let her decide what to do with them.  I really wanted to sway her decision on some items, but decided that this first time should be completely up to her.  I was very proud that she was so decisive.  She looked at a toy and immediately knew if she wanted to keep it or send it away.  Although I wished that she would have chosen to get rid of more stuff, I was actually surprised that she got rid of as much as she did.  We will try this activity again in a few weeks and see if she is willing to part with more of her stuff. 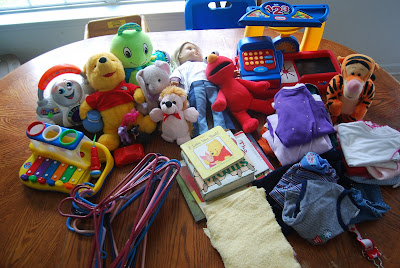 Things being decluttered this week:
fabric x 3
clothes x 17
children's books x 5
hangers x 13
toys x 12 (would have been 13, but after looking at this picture, Andrew decided we should keep the American Girl doll for Ella since she loves baby dolls)
total this week: 50
total since challenge began: 647
Posted by Peterson Party at 9:38 AM