A is for Aprons 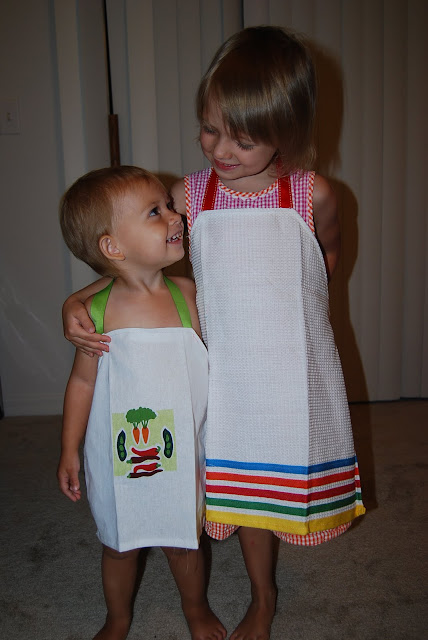 When I was little, my mom was the ultimate stay-at-home mom.  She didn't drive until she was fifty years old (I was a junior in high school by that time), so she was home all the time.  I never heard her complain about being home.  She found many projects to keep her busy.  In the '80's, when there was the Cabbage Patch Kids craze, my mom made dozens and dozens of the homemade version of that doll.  She even made the clothes for the dolls.  When I was little, she sewed dresses and other outfits for me (including a couple of matching "doll & me" outfits).  She reupholstered furniture.  She had an at home sewing business for a little while.  She only had one client at the time, but she sewed probably fifty shirts for this person.  She babysat on the side to give me someone to play with and also to earn a little extra spending money.  My mom cooked our meals everynight.  I rarely remember going out to eat as a child.  She made everything from scratch and even baked desserts and homemade bread for us.  We lived in a clean, tidy house.  It was peaceful and relaxing.  My mom was rarely idle.  She was reading, putting together puzzles, crafting, spending time with me, cooking/baking, etc.

When I think about the skills needed to be a homemaker/mom, I think of the example that my mom set.  Unfortunately, my mom was so efficient at her "job" that I rarely had to help.  I watched, but she did most everything for me.  Maybe this is because I was the baby for 10 years before my little sister came along or maybe this is because it was just easier for her to do it herself or maybe it was because I whined enough that she just did it all or maybe by the time it was my turn she was already tired from my older siblings and the 18 foster children that she had over the years. I'm not sure the reason, but I do know I had a great childhood.  The problem is that as I grew older and moved out and into a new role in my life, as a wife and eventually a mother, I struggled (and still do at times).  I had the hardest time getting into a routine and keeping a tidy house, and what is this making dinner every night stuff all about?  I never cooked more than a box of macaroni and cheese before I moved out!  What about laundry? Don't clean clothes just show up folded and in your drawers?  They did when I lived at home with my mom!

I know that the skills that my mom demonstrated are so very important.  Because of this, we will be including homemaking/crafting/life skills lessons into our homeschool routine.  In an effort to help my children have an easier transition into their own homes one day, I hope to teach them the skills they need to have.  I want to make these skills as second nature for my children while they are living in our house, and not just something that they witness, but that they actually help with.  We will incorporate these skills with the letter of the week.

Last week was the letter A.  The girls were introduced to sewing by helping me make aprons.  These aprons were so simple to make.  We went to the dollar store, where the girls each picked out a kitchen towel.  We brought them home and measured the towel to the girls. Then, I cut the towel to the appropriate length (some kitchen towels are already the right size for Arin, but the one she picked out needed to be shortened).  The girls handed me pins and also sat on my lap as I sewed the hem.  I folded down the top corners of the towel and sewed them and then cut off the excess fabic.  Then, I cut ribbon to go around the neck and middle of the apron.  I sewed one side of the ribbon on to the apron and added velcro to the other side so that the girls could easily put the apron on by themselves.  The girls were fascinated by the sewing machine.  They also loved sticking the pins into the pin cushion and pulling them back out.  That was also a favorite activity of mine when I was little watching my mom sew!

Of course the girls did not use the sewing machine by themselves, but there was nobody else home at the time to take pictures of them on my lap helping to sew, so they posed for sewing machine pictures! 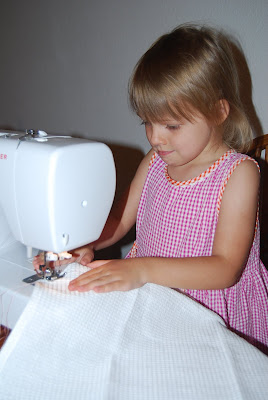 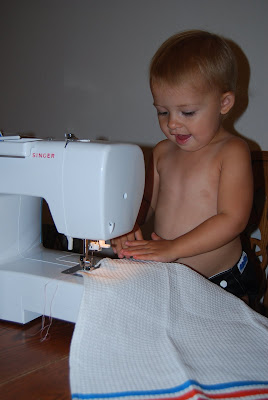 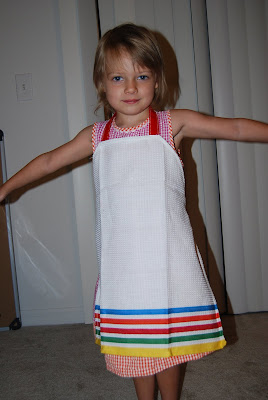 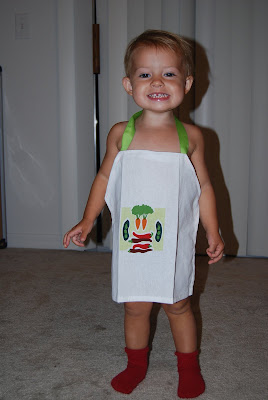 Email ThisBlogThis!Share to TwitterShare to FacebookShare to Pinterest
Labels: Letter Aa, Letter of the Week

You mom sounds amazing. I agree with you on teaching your children the tasks along side you. Froggy loves helping me sew, particularly taking the pins in and out of the pin cushion. I have even started letting her control the lever to reverse stitching. It is fun to work together even if it takes four times as long.

The aprons turned out beautiful.

Great teaching ideas for letters (I love the apron idea, so cute)! I hope to be checking in for more ideas:)
Thanks,